Samos: The town of Samos, built amphitheatrically around the bay of Vathy, is the capital of the island since the Principality era. Neoclassical and traditional buildings adorn the town. The quay with the Pythagoras square and the characteristic lion sculpture, a symbol of the Samian bravery, is the main centre of urban life.

Ano Vathy: One of the oldest settlements on the island that preserves largely its traditional character with beautiful houses, cobbled streets, picturesque squares and numerous churches. A typical attraction is the two-aisled church of “Ai Giannakis” of 1799 and the namesake open theatre where cultural events are held.

Karlovasi: A town with glorious past, built on the edge of lush hillsides where stepped crops alternate with dense pine forests. It consists of the settlements of Palaio, Neo and Mesaio Karlovasi, the Port and Ormos (the bay). The headquarters of the Faculty of Sciences of the Aegean University are in Karlovasi. Wealthy old manors and imposing churches create the image of a town where tradition goes hand in hand with entrepreneurship, the new with the old.

Pythagorio: Built on the ruins of the ancient town of Samos, once a poor fishing village, today it is the most popular, cosmopolitan resort of the island. It has been designated a UNESCO World Heritage Site, because of the important archaeological findings. Beaches, restaurants, cafés, nightlife, day trips by boat, are elements that attract visitors. The port and the neighbouring marina can accommodate small and large boats. Sea routes for the Dodecanese also depart from here.

Marathokampos: At the foot of Kerkis with beautiful stone houses and narrow streets, it preserves historical references from the early 17th century. Ormos and Kampos are two developed tourist coastal areas of Marathokampos.

Kokkari: A picturesque fishing village that has become a coveted tourist destination, with amazing beaches. In the surrounding green slopes, hiking trails are beautifully maintained between pine forests and vineyards. The Samian orchid is cultivated in the area.

Vourliotes: Α beautiful mountain village, dating from the 16th century. Just outside the village is the oldest monastery of Samos, the Monastery of Panagia Vronta. The route on the dirt road, through pine forests and crops, ends up on the top of Ampelos Mountain (or Karvounis).

Agios Konstantinos: A coastal village with a fishing port and tourist infrastructure. At its east edges, from a small ravine overgrown with trees, special hiking trails begin.

Manolates: A village with strong local character, picturesque neighbourhoods and breathtaking views. It hosts a small settlement for local and foreign artists, as well as great taverns.

Ampelos: Amphitheatrically built at an altitude of about 300 metres with a unique view of the Aegean. Many trails start from here to explore the verdant area where you can also check out the natural small waterfalls.

Stavrinides: A small mountain village with abundant springs, surrounded by ravines and forests.

Palaiokastro: Named after the ruins of an old castle in the area. The taverns in its small squares attract many regulars. In the nearby coastal settlements of Kerveli, Poseidonio, Klima and Psili Ammos, with views to the nearby coast of Asia Minor, we come across small, quiet beaches and taverns with seafood.

Mytilinioi: A town built amphitheatrically in a valley with many churches and chapels. The Natural History Museum with interesting exhibits is also located there. The taverns and traditional cafés on the central square are always full of residents and visitors. An outdoor movie theatre will take you back in time with film screenings in a beautiful garden.

Chora: The ancient capital of the island. It is worth visiting the old Cathedral, the fountains and the traditional laundries.

Heraion: A coastal settlement named after the ancient temple of Hera. In its beautiful beach there are many taverns and cafés.

Mavratzaioi: A destination for nature-lovers with trails that lead to the mountain Ampelos. The village is famous for its pottery workshops. The Monastery of Timios Stavros is located nearby.

Koumaradaioi: It took its name from the arbutuses [koumaria] growing in the region. It was one of the first “Ladochoria” of Samos. To the southeast lies the Megali Panagia Monastery.

Pyrgos: A large village built on the banks of the Amfilyssos River known for its famous thyme honey. There are small traditional cafés and taverns in the narrow cobbled streets.

Pagondas: Built amphitheatrically and surrounded by vineyards and olive groves. The lovely square and the small folklore museum are the main attractions.

Spatharaioi: The “balcony” of southern Samos with views to the Dodecanese. Known by the locals as the caldera of Samos for the breathtaking views and the magnificent sunset.  It is worth wandering the alleyways and visiting the three-aisled basilica church of the Taxiarch Michael and the primary school, built in 1931.

The islet Samiopoula with the exotic Psalida beach, just 850 metres from the southern coast of Samos, is accessible by small boat from Pythagorio and Heraion.

Platanos: Built high on Karvounis, between forests and terraced vineyards with breathtaking views of the imposing Kerkis mountain. The primary school, old houses, fountains and laundry rooms are excellent examples of folk architecture. The picturesque square with the sycamores is full of life with cosy traditional cafés and taverns.

Ydrousa: Known for its many springs and beautiful stone houses. It is worth visiting the Church of Agios Athanasios and Kyrillos from the 18th century.

Ormos Marathokampos: An old seaside fishing village with little taverns on the port, once called “Gialos”. It features a marina, a fishing haven and a small museum of traditional shipbuilding practice.

Votsalakia: A tourist area along the namesake beach, looking out to the imposing mountain of Kerkis.

Kallithea: With great views to Ikaria and one of the most beautiful sunsets of Samos. Higher up, on a dense hillside there is a cave with the chapel of Panagia Makrini. At the bay of Agios Isidoros we find one of the oldest shipyards of Samos.

Drakaioi: The most remote village of the island, on a verdant, rocky slope of Kerkis. The view extends from the coast of Asia Minor to the Drakano Cape of Ikaria – an ancient observatory and fryctoria (beacon tower), from where it is assumed that its name derives. 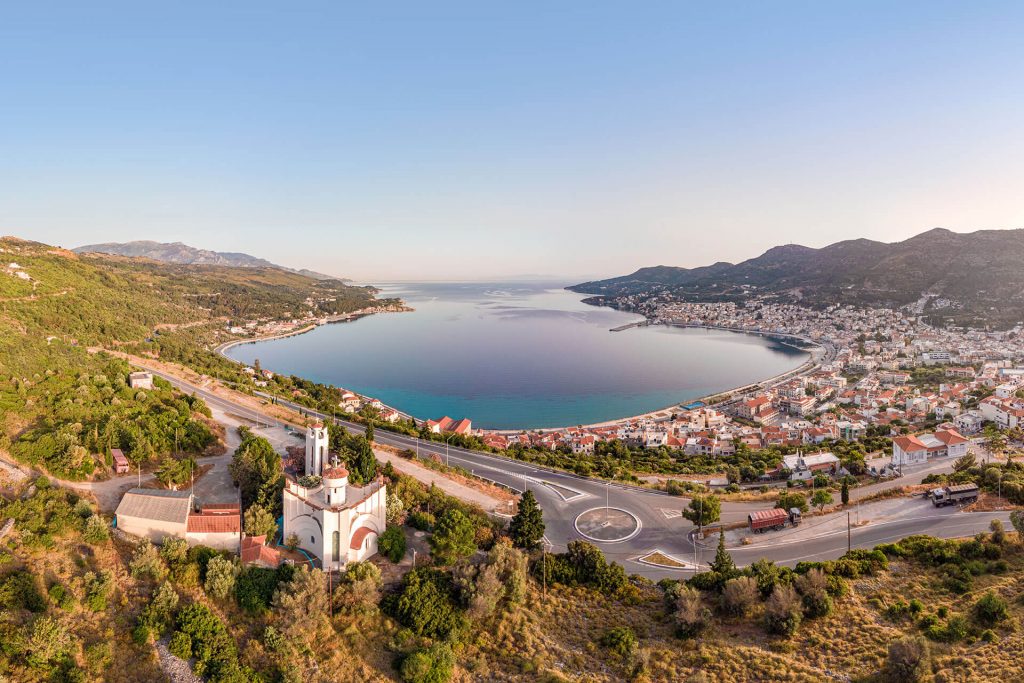 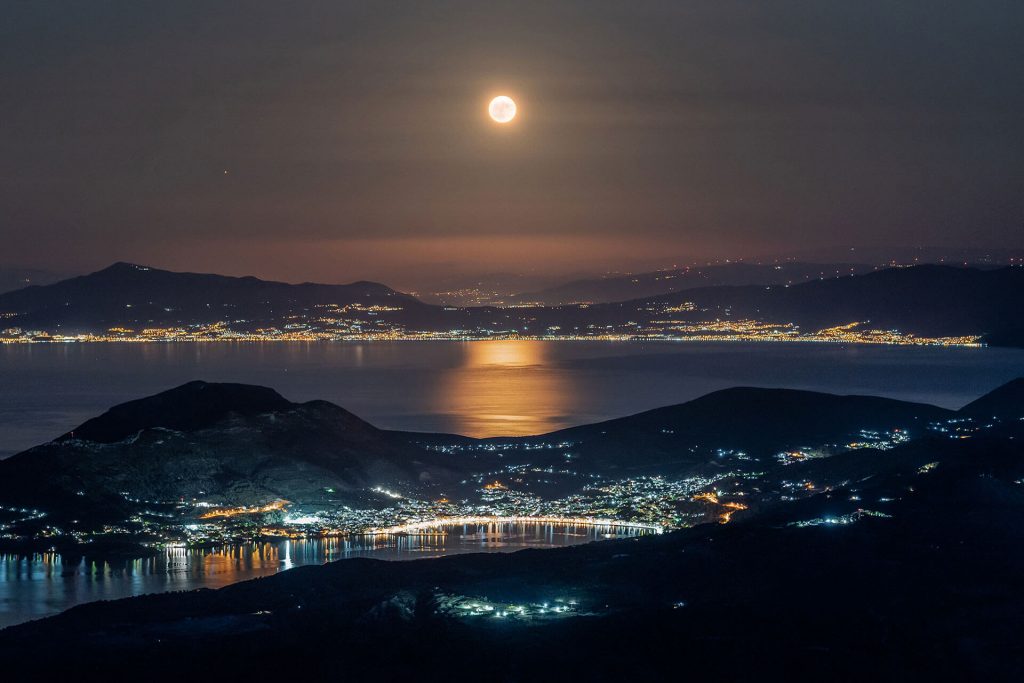 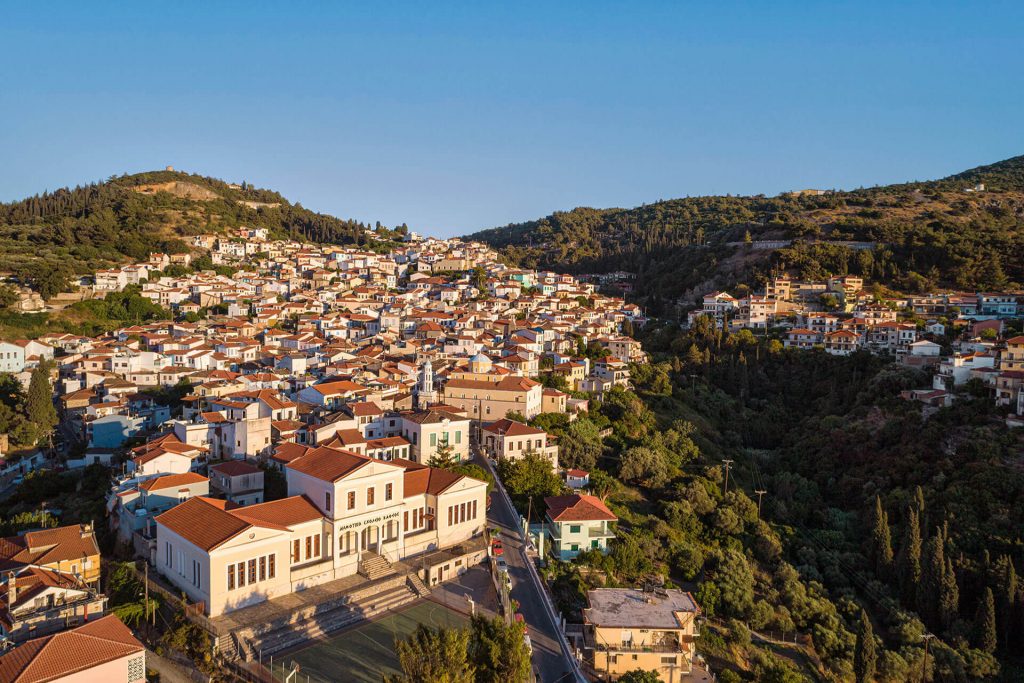 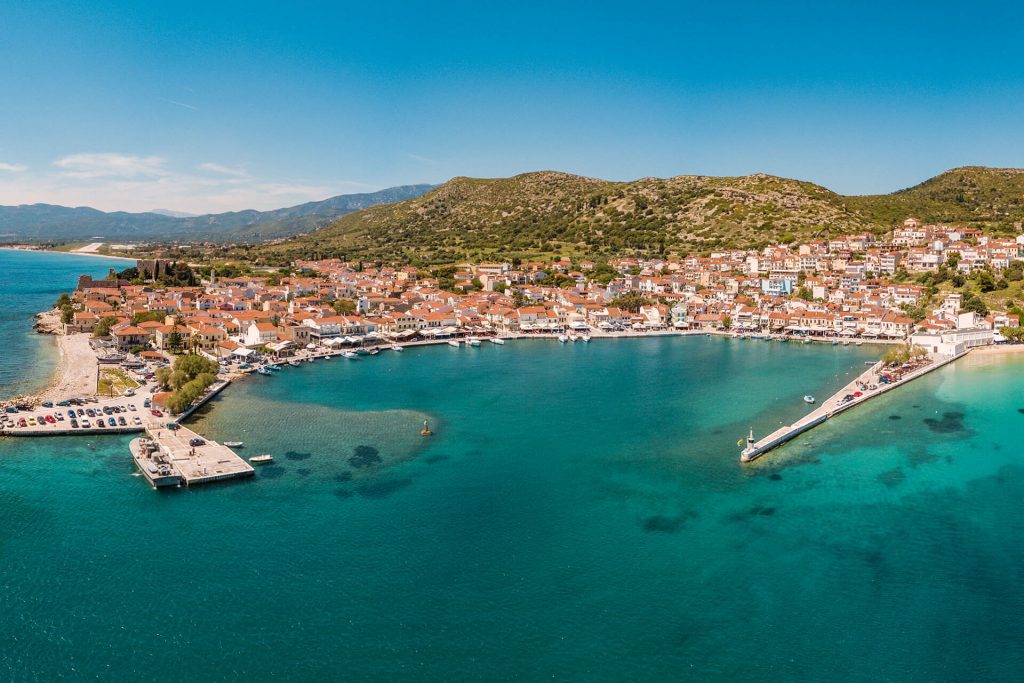 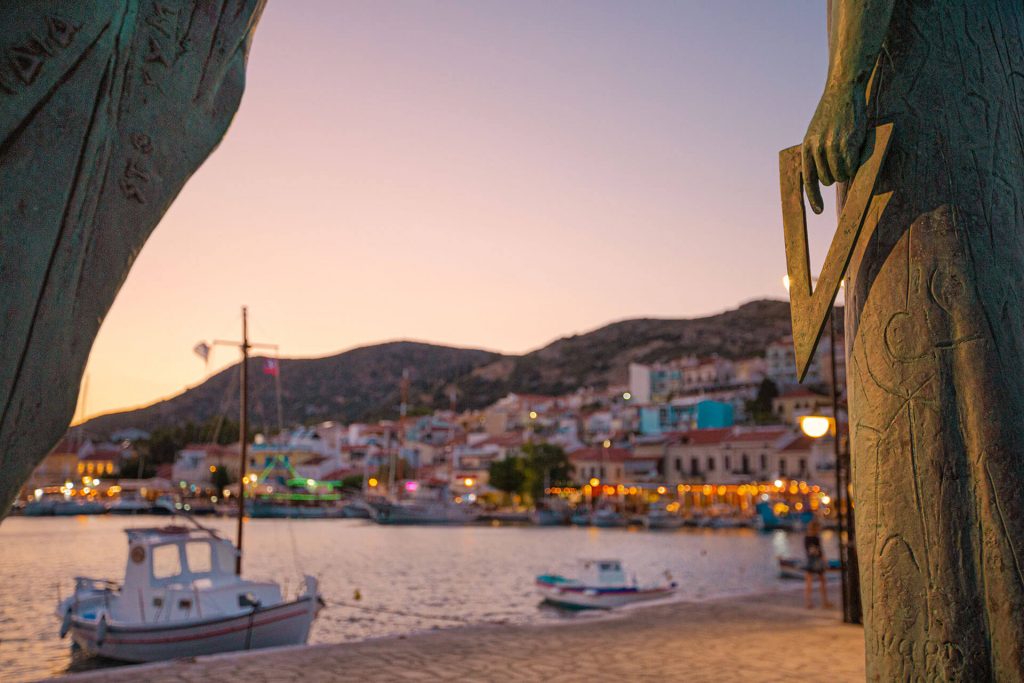 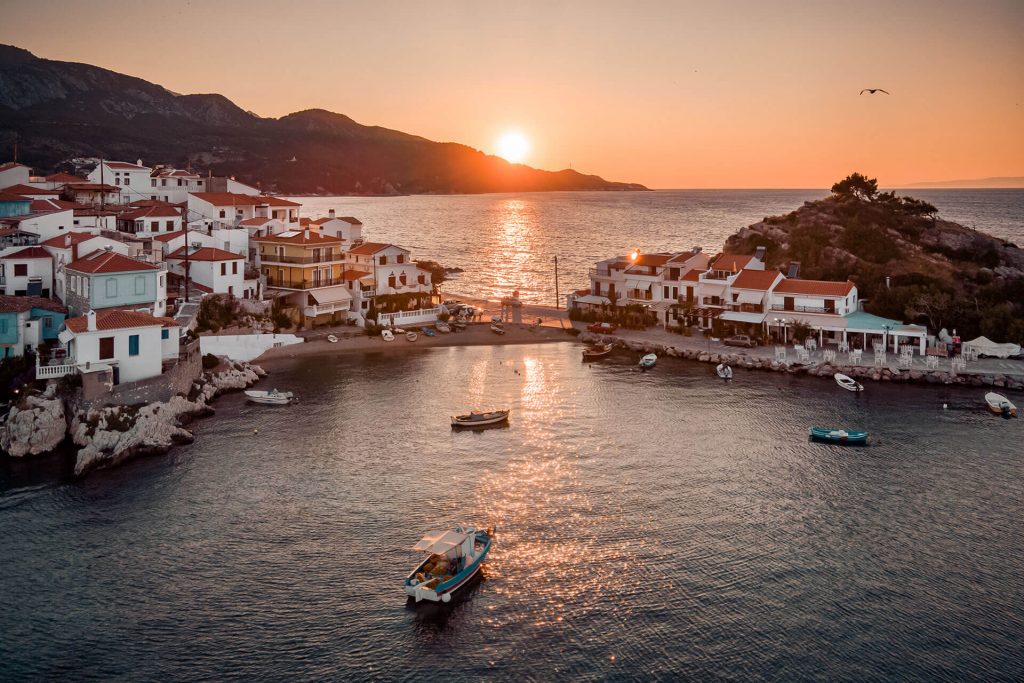 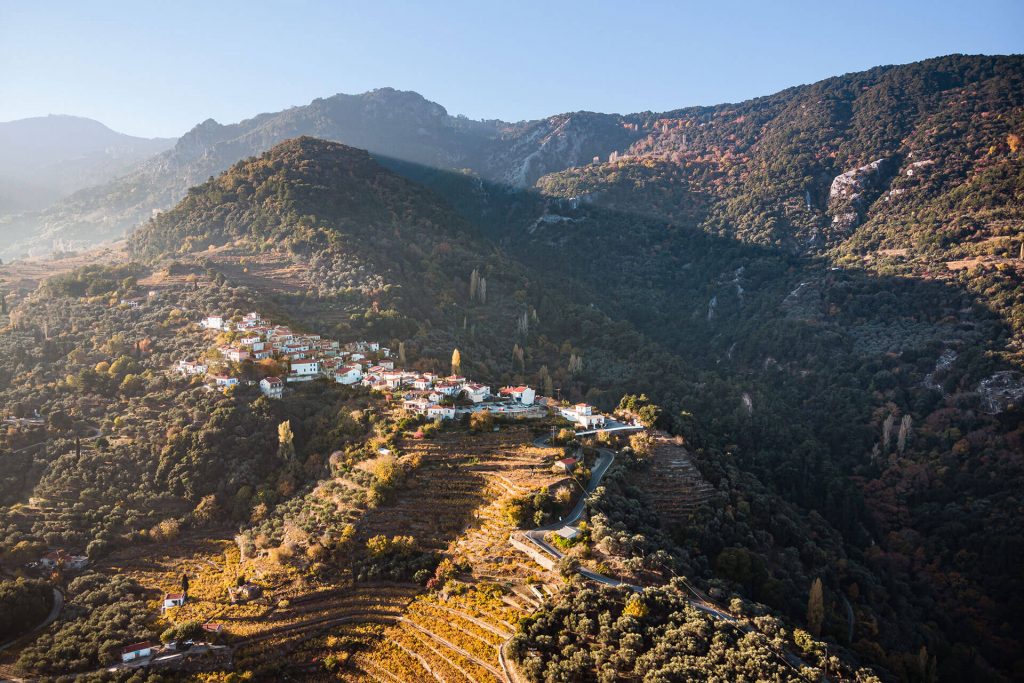 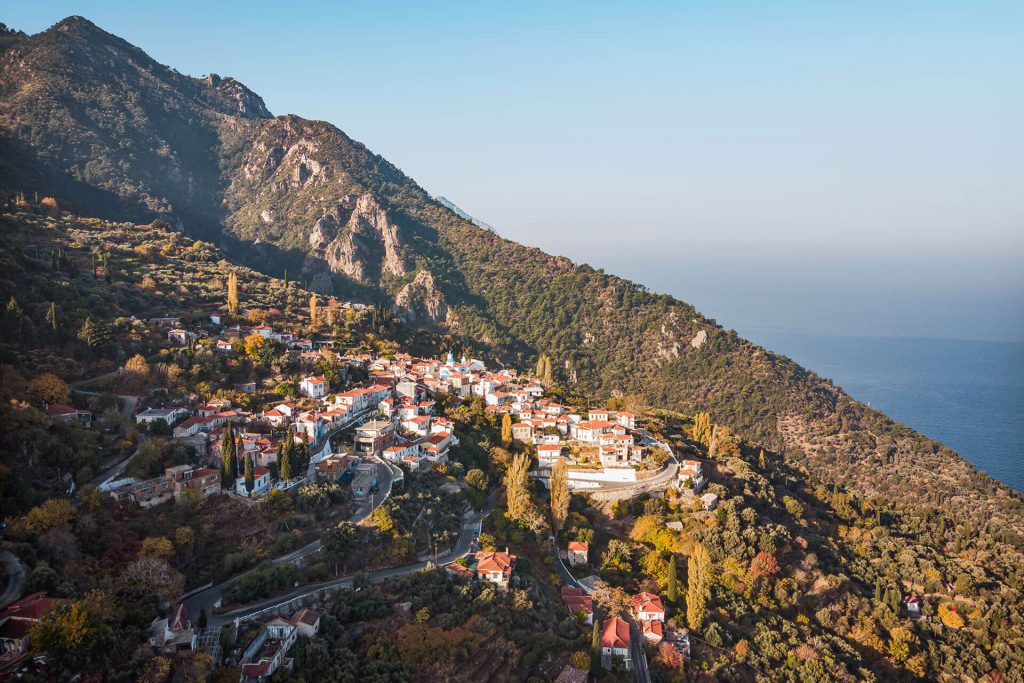 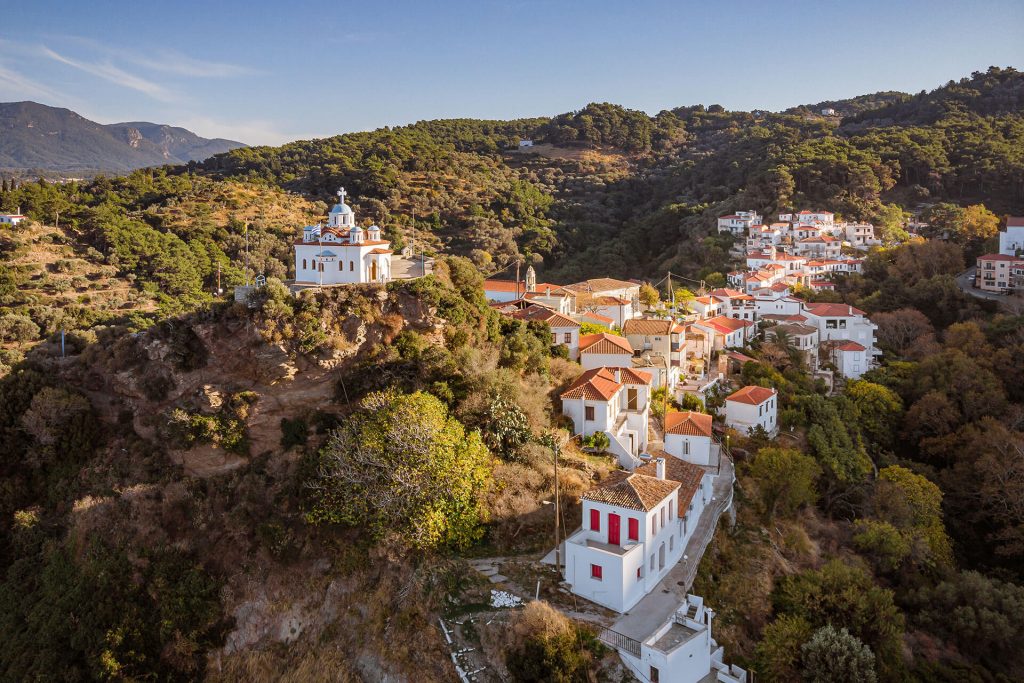